It may be a Cliché but what self respecting cigar shop would not have a cigar holding Indian?

Well, we have two of them! 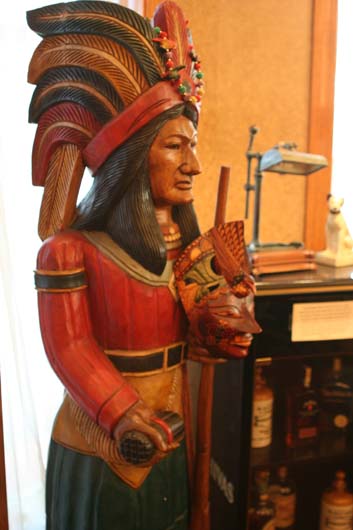 History of the Cigar Store Indian

Wood Statues were commonly used as commercial advertisement and signposts for retail and tobacco shops throughout early America.

Carvers sculpted Indian chiefs, braves, princesses and Indian maidens, sometimes with boarded papooses. Most of these displayed some form of tobacco in their hands or on their clothing.

While some shop figures were countertop models, the most convincing of these silent hawkers stood just outside the door, and were often mounted on wheels so that they could be rolled in and out. Such full-length figures date to the 1700’s, but had their heyday in the mid-to late 1800’s; they began to disappear after the turn of the century as electrified signs made them increasingly obsolete.

Today this chief and his priest stand outside our Nostalgia shop serving as a symbol that a quality stogie is waiting for you inside.